The expectation when going to watch Disney’s new Lion King was neither low nor high since it is usually not helpful to compare remakes of movies with previous versions, unless certain aspects of the narrative are drastically altered.

But that is not the point of discussion today. Since I liked the story, the music, the fun and the execution last time around, I did hope to have a pleasant movie experience. In some sense I certainly did.

However, the few positives were outweighed by the many cringeworthy moments in the end.

First impressions. In a general sense, the pacing of the movie was a success. Time was added and more could have been added, since the realm of The Lion King looks stunning. The visual feast of birds, insects, animals, trees, skies, waters and landscapes of Africa were very well demonstrated. In addition, the score of the movie suited the scenes. Instrumental musical parts were most definitely up to par with the changing tone of the movie.

The effects. Yes, the outline was nicely drawn, but the details were lacking. Effects such as facial expressions of the animals could have been far more ambivalent and intense – if one takes into consideration the fact that we are observing talking animals, I for one believe that their face should also express the emotion they are conveying. We’ll excempt Scar from this, since his facial expression is always gloomy and sinister. But scenes like Mufasa’s death, Simbas and Nalas key dialouges or the end fight seemed rather stiff for lack of intensity.

On the other hand, movement and dynamics were put together very well – the running, fighting, and general different sizes, paces and manners of movement were shown nicely. Yet, when focusing on character development, a changing dynamic was left to be desired.

The songs. Lion King is a beautiful movie in great part because of songs like Can You Feel the Love Tonight and The Circle of Life have their moments and really tug on the viewers‘ heart strings. It’s hard to recall the corresponding emotions since last I saw the movie I was quite a bit younger, but the Beyonce version of Love Tonight felt overdone and overacted, with Timon and Pumbaa adding to it just making a joke out of something supposedly epic.

The humor. The witty banter of Timon and Pumbaa is still fresh as ever, if not better than in the original version. The fact that they make a joke out of Simba x Nala is one thing, but the meta of almost breaking into Be Our Guest from Beauty and the Beast is very funny on another level. It’s a narcissistic move on Disney’s part, but it works.

The dialogue in general was just fine – remembering that this is supposed to be a childrens’/family style movie, a Disney movie, is justifying the light and simple dialogues.

On the other hand, the brutality of the fights was surprising, but since the CGI makes everything look more realistic (minus missing genitalia on all male animals – but again, this is a family movie), this was unavoidable, and for me as an adult viewer, enjoyable. 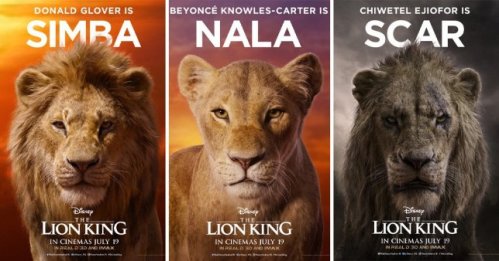 The Beyonce of it all. The cultural impact Beyonce has had on the African American community in the last years is undeniable, and how she is turning the movie into a real vessel to bring African artists to a wider audience is admirable and deserves every inch of praise. That does not mean Beyonce voicing Nala does the character of Nala any good whatsoever. I found myself completely distracted because it is not possible to hear Nala, it’s Beyonce trying to convey Nala.

(It seems they have altered Nalas dialogues, so with Beyonce/Nala screaming „Lions! Attack!“, makes one expect Beyonce’s Formation to be played next. And that does not belong in The Lion King. Breaking character like that lessens a movie experience, since it transports the viewer somewhere else and reduces emotional investment towards where emotional investment is supposed to go. Not smart. But maybe a child wouldn’t notice.

This is not supposed to be a Beyonce experience, and her presence fails to adapt to its format – not a sign of good acting skills, either.

And I absolutely adored Beyonce as Etta James in Cadillac Records, so I was surprised at my own reaction, trust me. But Beyonce as Nala was not a good choice for this movie.)

The verdict. As a Disney fan, I’m happy the movies are being remade, since the new generation would probably not appreciate the old format. I also applaud the nods to the old movie version, and found the general visual and audial experience to be well excecuted.

However, I believe that only a child or a Disney fan will be able to enjoy this movie, since it is shallow and poorly executed on many narrative levels, parodies itself a tad too much, and has been significantly lessened by Beyoncefication.

The more one thinks on it, the more one inevitably cringes on it. So, if a shallow and pleasant cartoonish experience is what you were looking for, definitely give it a go.

And yes, since this is a Disney movie, that experience is just fine. But the way The Lion King is being marketed, is as something it is most definitely not.

All in all, I would not recommend The Lion King.

(Photos from here and here)