The Janus-faced Macabre of Japanese Literature

I’ve recently read novels by two Japanese authors: The Face of Another by Kōbō Abe and A Personal Matter by Kenzaburō Ōe. Both are very interesting and discussion-worthy, and also quite similar in how they describe the human condition. At the same time, both are very, very disturbing.

So, let’s talk about that!

Although there is a plentitude of ‘nice’ novels, nature-bound poetry and short stories filled with platonic yearning to be found in Japanese literature, it is at first surprising to find something that describes the very darkest aspects of the human mind. This is  a fascinating contrast to what goes in Japan: Your typical Japanese fellow is taught that he is not to express very radical opinions in public about antyhing, as it is very inconsiderate towards others.

Now, that part might still be considered as the usual rule for smalltalk in the Western world – but also, eating in public while walking is frowned upon. When going somewhere as a group, one must always and absolutely put the interests of the group before one’s own, and – god forbid – in any social setting where eating out is involved, have a special request when ordering from the menu in a restaurant! Gasp! (I have not been to Japan but have watched an unhealthy amount of hours of YouTube videos on the subject, and have taken Japanese while in University. So I know enough.)

The rift between polite and reserved public behaviour in Japan and radical literature with no taboos is quite astonishing.

Sure I‘ve read those lovely emotional passages by Kazuo Ishiguro and Yasunari Kawabata – but man, are there a lot of writers who are very interested in all of the extremes a human mind and body can enter. It doesn‘t matter if the narrative is meant to symbolize something or be an allegory – these two shocked me quite a bit.

Yes, Japanese art and movies absolutely go deep into the macabre and are known for it (actually, check out this great essay on the movie version of what I’m about to talk about here), but I haven’t had this strong of an impression from Japanese literature up until now, having read quite a few Japanese novels before.

So, both are similar in many aspects, one of them being the relationship of the protagonist to his significant other, in this case being the wife. On the one hand there is the classic madonna whore complex going on – one of the men has to put on a mask  and become somebody else in order to to reconnect with his wife, since having lost his face to a tragical accident. The other goes through a rather unorthodox sexual ritual with an old friend and consequently has an affair with her, which then results in him finding his way back to his family. One man who wants to reconnect but cannot do so as himself, so he considers raping his wife to be an appropriate deed – and another, who believes having an affair to overcome his fear of vaginas is the right thing to do.

Ōe’s psychological profiling goes a bit further than Abe’s, since his wife character actually answers back, destroys the protagonist’s self-made mask and with that his illusions of his new self, making the tragedy complete. But, of course, Ōe’s novel is all fiction. Abe’s story has a strong autobiographical background, and as art imitates life, his protagonist reconciles with his wife.

The silent, obedient and blissfully ignorant wife is another contrasting figure of those novels, where male protagonists go on macabre escapades to find themselves. That’s a question I have to ask from Japanese literature as well – the narratologically evolved stories have a regression in their depiction of human emotional connection. However, I don’t believe this to mainly be a critique on conventional marriage: it rather points to a  more universal topic of Japanese literature, and that is the feeling of being alone and detached from the world, unable to communicate the true pain in one’s soul.

For Abe’s main character the detachment comes from having his face disfigured in a laboratory accident, so he is now unable to move and communicate freely. He feels alone and has to literally put the face of another on his own in order to feel free again. However, the person he becomes does not help him to find happiness, either. So in the end he remains even more alone.

Ōe’s protagonist, Bird, has a disfigured son, which seems for him to be the end of his life and dreams. There is a sense of detachment, loss of emotions and his fleeing into someone else‘s life and emotions as a means to escape his own, since his lover Himiko has also had a tragic past. But Bird doesn‘t see to have any kind of feelings, empathy or want of communication towards his wife or in-laws. He seems to be completely detached on the inside, all the while following social protocol and visiting them in the hospital and attending to his other duties – until he finally comes unhinged and descends into chaos, to emerge as healed in the end.

The life partners play no role in the mourning and healing process of those characters. They have to find their answers for themselves, on their own, whilst remaining emotionally severed from their partners – and in this aspect lies the true tragedy and mirror of Japanese society, since we do knot know these things, as everybody keeps being very polite and well-mannered at all times. The hurt the silent peson carries inside can be enormous and break a person completely. This has even led to a fashion movement called yami kawaii, trying to break the taboo of open discussion on melancholy and suicide. (Here’s an article on that topic.) 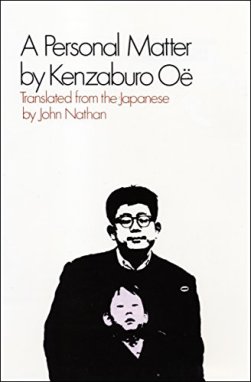 So, even with the familial relations being restored, it isn’t really a happy end, since making the right choice and finding happiness in the morality of one’s behaviour does not mean an endless feeling of lonelyness and detachment. Now we’ve come to the place of dialogue were Western and Eastern culture can meet and converse, because the search of love and acceptance are as universal and timeless as the fear of remaining forever alone.

One last aspect of those novels is the highly detailed scientific description of the tragical elements in both novels: Ōe goes very much into detail with both his son’s condition and the anatomical side of his rather violent love affair. Abe explicitly describes each layer of material used for his mask, and the psychological implications for certain facial features, which he then combines into a type he likes to be viewed as, or rather sees himself as.

This rather dry and reporting style is reminiscent of Kafka, who has written some of the most macabre literature of the 20th century and is cited as one of both writers’ inspiration and influence. So the East and the West factually come together as well.

I have read many a Japanese novel and have found them to be melancholy-filled and have a yearning, sad undertone, and from time to time some sexual undertones. But Ōe and Abe have brought me to see a new, rather hidden aspect of Japanese literature.

The conclusion? We are not different at all, if one only dare to go looking underneath the surface. And to end on a really dull note (because there has been excitement enough and I would like to emulate the disappointment I felt at both endings):

You shouldn’t judge a book by it’s cover.