Startseite › Home › Why Aquaman is Adequate

Why Aquaman is Adequate

Any Game of Thrones fan has a soft spot for Jason Momoa, so when his addition to the DC universe was announced I was quite happy about it. That dude has enough charisma to carry any movie, right?

Well, sort of. It is quite obvious that anything Jason Momoa says or does as Aquaman is said and done with infinite charisma and wilfulness, yet the movie lacks a lot of things and overcompensates with other things. This is why I deem it to be adequate: Aquaman is a nice experience and not a bad superhero movie in comparison to many others, but it does not excel, either. There are just a lot of „yeah I guess it was okay“ type conclusions to be made for this one.

There are no huge plot spoilers, so you can still keep on reading if you haven’t seen the movie yet.

These are my main points of analysis:

Yesss, Jason Momoa looks good in a fishermans gear, a golden ribbed sealord and with not much on as well, obviously. His prerogative to stay the hell away from ocean politics is important as well – Arthur Curry can talk to fish and is super strong, but he prefers to chug some beers with his pops and keep a low profile. His heritage catches up with him, however, and he steps up in the end. It’s a nice story. Not that Momoa has any substantial dialogue in it. Or for that matter, any of the characters. Nevermind that lack of substance, though, they all look so good fighting each other in their suits. That ought to do it, right? 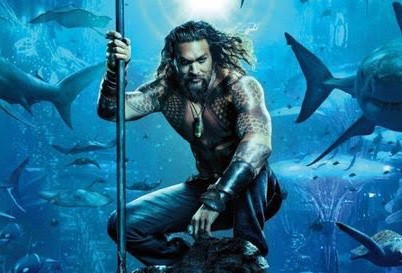 Okay, maybe one smouldering hero with a feisty royal love interest isn’t enough, so add another story of tragic loss and a romantic storyline about life-long yearning to thicken the layer of emotional frosting. But why oh why do their wigs have to be so horrible?

Again, the super complex political ocean landscape where the underwater version of game of thrones could have been delved into much deeper, we have to also have an absolutely random pirate who crosses Aquamans and then his brothers path to become the supposed supervillain? Black Manta is just a result of many, many bad choices and his presence totally redundant. So very unnecessary and cringeworthy.

Whereas characters like the kings of the seven kingdoms are quite intriguing and interesting on their own as well as in the context of their allegiances. The underwater politics of it all makes for a wonderful plot – the fact of it being compared to Black Panther under water is fine to me. It’s still original enough to work. I’m just a little bit disappointed they didn’t use Willem Dafoe more.

Julie Andrews doing her best Smaug impression was extremely cringeworthy for me. 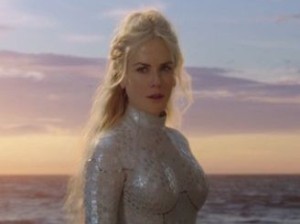 The visual and audial experience.

Whilst I found the whole visual execution of the movie to be absolutely stunning, the score leaves much to be desired. The epic underwater battles – and those above surface no less – were a feast for the visual nerve, while the soundtrack just made me feel like someone was having an identity crisis or someone put his high school reunion dance mix on shuffle. The music has no connection to the scenes and jumps tempos, genres and moods while completely ignoring how the tone of the movie is actually set. Seemed like someone had an accident and the intern had to step in.

I hope they fired that intern.

All in all, I guess Avengers, Wonder Woman and Black Panther have hyped up our expectations so high that anything short of excellency will just not do anymore for a superhero movie. However mediocre Aquaman is, though, it still remains an okay movie and an entertaining and visually pleasing one at that.