Here’s what I read in April!

Ottessa Moshfegh: My Year of Rest and Relaxation (2019)

Interestingly enough, this book is exactly what the title promises. And it so is not.

I started the month with an absolute highlight and am making this novel next weeks topic, so I won’t say a lot about this one, except that Ottessa Moshfegh continues to surprise, impress and intrigue me beyond any other female writer.

My Year of Rest and Relaxation is surely an unnerving and unusual reading experience – as was Eileen -, but it was also extraordinary. More on that next week. 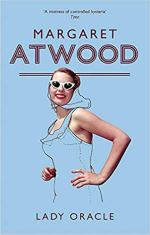 Atwoods protagonist who stages her own death ironically writes costume gothic novels where the leading lady is always being chased by, threatened by or saved by powerful men. Her own life turns out in a similar manner, as she tries to find her worth as a woman and as a writer, trying to come into her own while being owned by men.

While I enjoyed reading all of the small stories combined in this novel, it feels like something written by an author who is obviously brilliant but hasn’t found her style yet.

Nevertheless, even as a lone standing read it would prompt me to look further into Atwood. This is one of Atwoods first novels, which establishes both my critique and my compliment.

Raud is an entity in Estonia: a rock musician, a critic, a writer and a charismatic and witty tv personality. He usually possesses an iron-clad sarcasm and sharp, intelligent arguments when speaking or writing.

So, naturally, this book was a disappointment as it just collects and repeats already known clichés about being estonian. Nothing valuable has been added by Raud. This collectively composed compilation could have been written by any mediocre beginner, so the fact that Raud put his name on it disappoints me even further.

Sure, the sentences in the very short chapters are somewhat well-written, but it’s more like a word robot put them together. The Estonians Handbook lacks soul, substance and originality.

Pamuk was awarded the Nobel Prize in Literature in 2006 and is the only Turk to have gotten this honor as of this day. Snow tells us about political and existential crises, as well as crises of the heart, lived through by one emigré poet who returns to his home in Turkey and is sucked into the whirlwind of the revolution. There’s a lot to take in, but Pamuk writes in an enjoyable way.

In regards to the main story, Snow is also composed rather well. However, the writer has overdone it by adding a frame, letting the story be told by another character rather than just bringing the story to the reader unfiltered.

So while I found Snow interesting, it could have been composed in a better way.