Startseite › Home › Why ‚Green Book‘ Does Right by its Subject Matter

Why ‚Green Book‘ Does Right by its Subject Matter

After Peter Farrelly’s Green Book won the Oscar last year, it was not only Spike Lee who expressed his disappointment about this recognition. (Variety) The movie has been well received, praised, nominated and awarded highly, winning not only the 2018 Oscar for Best Picture, but also for Best Original Screenplay and Best Supporting Actor. (Wikipedia) However, critics say the  movie is too soft and the subject matter should have been handled in a less cookie-cutter way of telling a story about a black pianist going on tour in the deep south of the USA.

Here’s why my opinion differs from that.

Spoiler warning – key plot points will be revealed, do not read if you do not wish to know.

The genre of the movie. There are different ways to tell a story and respectively different perspectives and focal points to one story. This movie, as the perceptive viewer can already tell by the heartfelt tone of the trailer, the cheerful colors of the posters and the score, is meant to be a light-hearted family movie about personal growth, overcoming prejudice and the power of humor and friendship in an ugly backwards world.

The friendship between Tony and Shirley is in the foreground here, and the individual journey the characters make, the facts of the different stations where problems arise are shown, but secondary. That is not so by accident.

The protagonist. Now one could think the protagonist of this movie is the gentle-mannered uptight eccentric artist who is being driven. Yes, Mahershala Ali does a wonderful job without question portraying Shirley, whose seemingly unfaltering sense of cleanlyness, good manners and calm falter when we see him drinking himself to sleep every night and suffering in his loneliness. However, the main character in this movie is not the passenger, but the driver, who comes from a deeply routed culture of racism – the main issue being shown is the white racism in 60s America, and although it is impossible to not take offense in the black and white racism, because it is so obvious and inhumane how Shirley is treated, the real issues which the movie shows a light to are very rarely discussed in movies. Once the officer leans of Tony’s Italian heritage, he describes him as ’no better than a negro‘, which is often forgotten in stories from the 60s. When one sees those aspects clearly, the whole core theme changes. 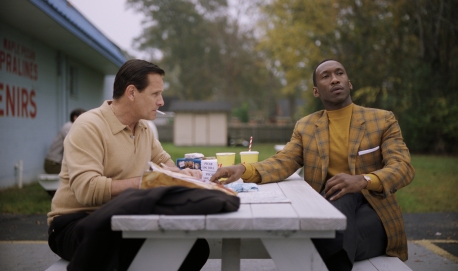 The realism. I actually admire the way this movie chooses to show problematic behaviour in regards to the wealth hosting Shirley’s tour, the police, the blacks – all of those crowds are ambivalent. Not every police officer hates blacks and even among superior officers at least one is brave enough to point out that he does have rights, y’know? Among the black crowd who are impressed with Shirley’s piano skills, some try to rob him on a parking lot. No one demographic is saintly, no other group is a grey mass. Everything in life has levels and nuances and the fact that this movie shows such subtletys in almost every stop the duo make is quite impressive.

Family values. If antyhing in this movie is cookie cutter, it’s Tony’s charater and how his story of emancipation is almost completely unproblematic. His devotion to his wife and the clear knowledge of his obligations toward Shirley are unwavering and should maybe leave him to be a boring protagonist – however, his banter with Shirley and the way his evolution also deconstructs the stereotype of the catholic Italian immigrant small time crook. The letters Tony writes to his wife are hilarious, but loving, and the fact that he is confident to write one of his own in the end shows his potential. When Shirley’s homosexuality is revealed, he acts like a true friend and just accepts it, not asking about it or trying to change anything about it. He earnestly invites the man to dine with his family at Chrismas, knowing Shirley is alone in this world.

My only problem with this character is Viggo Mortensens Italian accent. Now that is a point of great inner turbulence, because Mortensen is an American of Danish descent, has lived in South America and is trying for an Italian-American immigrant accent. On first impression one might say he’s laying it on too thick – but that’s his character too: Tony Lip is an over the top seemingly stereotypical Italian, as comfortable with his mighty beer and foodlover belly as he is with his speech and everything else about himself. It’s Shirley who makes him strive to be a more refined version of himself – verbally, at least. In that light it makes sense for his accent to be that horrible, at least in the beginning.

The controversy. So, in actuality, once the movie is recognized for what it is, the subject matter itself changes. The fact that the movie is based on the The Negro Motorist Green Book and the fact that such a book was necessary for an african american to travel safely in America is offensive. Just the historical reality that discrimination was open and legal and basic things like dining in a restaurant, trying on a suit in a shop or even using the lavatory were prohibited for african americans in itself is controversial subject matter and keeps being such until this day, since police brutality and discrimination are very current topics. That such a book inspired a family friendly movie might also be viewed as a strange development. However, since we obviously know and aknowledge these events and problems, surely they mustn’t be front and center in every kind of narrative there is to be told about the 60s? Wouldn’t it be worse if a movie with lighter topics would choose to completely ignore the controversies of the times to be more family friendly? 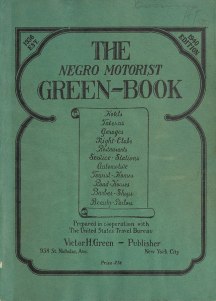 I very much like the fact that Shirley’s homosexuality is shown and Tony being made aware of it changes nothing in the story, nothing between their relationship and nothing within their development and their journey. This is how a friend would treat another, leaving the door open for him to start a conversation, but not thinking different or less of him because of his queerness. It also shines an even warmer light on Shirley who chooses to live how he wants, and dares to take the journey to places where he knows he is not really welcome. This is his legacy and this is enough in itself. The trope of the tortured artist, the struggle of being gay and living with that alone is a timeless issue, thus lifting the movie out of its time and making it more current than historical. So it’s  really not only about the 60s anymore anyway.

I would have liked to know more about is Shirley’s background, his previous life, his family and home and brother, but as said, this movie is about Tony whose home we are being invited into, whose every family member and cousin we meet at the dinner table at Christmas and whose wife we love alongside with him, his private letters we are allowed to read. That is not so by accident.

The conclusion. Green Book is a movie about someone who comes from an immigrant background and spiral of internal and external white racism. It is about this person meeting someone else who taking those issues of black racism on actively and braving the society that shuns him, while also seeking individual excellency in his craft and talent, and being proud of his talents, thus making more of himself. It is about the ensuing journey towards individual improvement and self-love.

The fact that Shirley brings out the best in Tony, while he was a good man to begin with, only adds onto the sweetness of the movie, showing us that even in controversial times, positive things can happen. This is the subject matter in Green Book and once we see and appreciate it for what it is, it becomes obvious that this movie did right by its topics all along.

(photos from here, here and here)