Home › Home › Cages we Build for Ourselves: Thoughts on Margaret Atwood

Cages we Build for Ourselves: Thoughts on Margaret Atwood

Canadian writer Margaret Atwood is a sensational creator and visionary. She is also a person who reminds us of the scariest possible scenarios available for the development of humanity: Handmaid’s Tale is going strong with season 3 on Hulu and there is no happy ending in sight for any of the characters, inside or outside Gilead.

Whether you’re a fan of the series or have read something else by Atwood, her oeuvre has one strong subtext I have discovered recently: We are only kept by the cages we build for ourselves. I will illustrate this point with some of the hard truths from her works I’ve recently enjoyed.

The body as a personal and pyschological cage is a central topic in Lady Oracle. The protagonist Joan Foster is always trying to escape her past, as her childhood and becoming years are nothing she wishes to remember. Her conviction of her fatness ruining her childhood and relationships within her family, and her defining herself by it – then, breaking out of her physical cage, just to throw herself into the next self-imposed restriction, are devastating circumstances women and men today still suffer from. 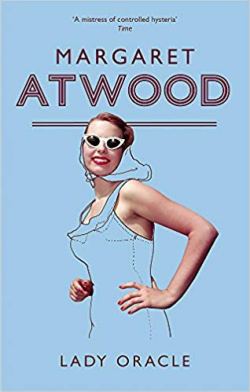 By defining her worth through her body and not having the motivation or the guts to overcome this complex, Joan robs herself of the possibilities of a normal childhood, and only when the chance presents itself to completely escape her roots does she take up the task of – very unhealthily – losing weight and taking on another forced role, the role of a regular married woman.

Marriage as a societal cage is supposed to stop existing somewhere during this century – but alas, these stereotypes still have a footing in 1976, when Lady Oracle was published, and still do now. The fear of being belittled by her husband and the desire to have something of her own drives Joan to hide her artistic talents and keep her novels to herself. It is no wonder that in the end she is reduced to the likes of the helpless heroines of her own Gothic fantasy novels, always having to be saved by a man because they are put in danger by another man.

This can be read as a parody and as a very funny story, but the notion of the cages we build for ourselves is still very visible and quite scary once you think about it a bit further.

Gender roles as a societal cage. We are trying to break out of it and broaden lines and limits, but the girl to female anatomy Atwood describes in Cat’s Eye holds its own in 1988 when the novel was published and remains as such today.

The word “frenemy” has a female root, since it is usually little girls who scheme against one another while smiling at each other when being in each others’ presence. This animosity against one another comes from the standard that girls are made of “everything nice, sugar and spice” and are never allowed to talk loudly, break things or get dirty.

Atwood writes about the ‘education’ of Elaine by her alleged friends in such a cruel and heartbreaking manner, those girls seem to be borderline psychopaths – and yet, memories from somewhere in school, being either the educator or the educated, do come to mind, since this sort of violent psychological and physical controlling of another human, often done in groups, was considered to be normal child or teen behavior. Boys are supposed to rough each other up, girls are not supposed to do anything like that – so, naturally, they do it in a much crueler way and in secrecy. Without visible scars.

If these cages – psychological, physical, and interpersonal – were not in place to start with, women might finally be able to support one another more openly, and it would not be so easy to cage them. Luckily, many leading ladies like Atwood herself already are showing us how that’s done.

Political cages. The psychological and ethical elements of the three cages are in a direct connection to how larger society is constructed, and the fact that these restrictions are still plausible today, makes political regression worryingly easy. Handmaid’s Tale consists exclusively of scenarios that have existed in a point of human history. There is not one key element that is fictional – which is obviously very scary. Developments are obvious, but the stronghold of a vast array of fundamentalist religious groups not only in the MENA region but within the United States itself, is extremely concerning.

I praised Michel Houellebecq in an essay a while ago (over here), and still recommend his novels strongly, but at the moment, Handmaid’s Tale is probably the most prominent warning sign to behold when thinking about cages we are building for ourselves.

So, if you’ve caught on to the show and find the message it carries to be important and interesting to you, I highly recommend reading Cat’s Eye  and Lady Oracle to widen your Atwood perspective.

Few female authors are so strongly current and yet so timeless, and few topics make me feel as strongly as escaping the cages we have built for ourselves. Once we heighten our awareness about our past and present, our future might become better for it. Critically reading Atwood is an amazing place to start that process.

Here’s another essay on awareness for your thoughts. It all comes together in the end.

Almost as if it was written by the same person. Ha.