Although I am a bookworm through and through, I truly enjoy watching a great movie.

With Oscar season fast approaching its climax, the time of consuming large quantities of great movies – and consequently writing more movie reviews to open more conversations about them – has come.

As I have already offered my thoughts on two excellent Oscar nominated movies for this season, Joker (link) and Once upon a Time in Hollywood (link), another recently watched movie needs to be discussed, which left me rather with mixed feelings.

Tolkien stands in the footsteps of massively successful trilogies of Lord of the Rings and The Hobbit, and although it is a biography, it still has a strong connection to the mythology and fandom around those worlds that it should gain enough attention and therefore attract the right cast and team to be a success. Sadly, there are enough reasons for it not to be that.

Going into those mixed feelings I had – let’s start with the positive aspects of Tolkien.

Tolkien is the story of a young man without financial means or grooming finding his way in life. It shows Tolkien aspiring to becoming a student at a renowned academical institution, making very hard choices in regards to love and ambition, and after all that turmoil finding his way to himself and surpassing those societal rules to achieve excellency in his own right.

This doesn’t happen without quite a bit of luck and a few helpers along the way, but the combination of all of those nuances of a life is what makes the story so beautiful and heartwarming.

Another wonderful aspect of the story is the fellowship of the four boys who form their bond at university. These are real-life events that obviously had a great influence for the books, but it is a part of the movie which is well executed on its own. All four characters have something special about them, and their comradery is beautifully shown from the very beginning of the movie.

Drawing lines into the Fantasy Universe.

As the movie begins, we see Tolkien in a trench during World War I, and as the movie progresses, visual effects show his visions of orcs, Uruk-hai and dragons amongst a very real human battlefield. The movie does a great job in showing how the very brutal and gripping battle scenes in LOTR came to be from the most terrifying events of war that Tolkien himself had to witness. Those beastly visuals of destruction are majestic and unnerving at the same time. Moreso for those who have seen the trilogies.

Tolkiens linguistical innovations and talents are unparallelled in the literary world. He was a remarkable linguist as well as a great storyteller and at least for me the tidbits about the creation of his languages and the ideas behind the word-creating process are absolutely fascinating. I would have much rather learned more about those thought processes than witness an ongoing dialogue about cellar door – which, yes, has a prominent place in Tolkien’s life, but did not have to be dragged out as a dried out dialogue between two characters without any chemistry.

And with that we turn to the negative aspects of the movie.

While the story in itself shows Tolkien as the determined, individualistic and witty and brilliant person he is, at some points it drags painfully slowly. Some episodes, while I understand their intented role for the romantic arc, are unnecessary and do not help in any way to drive the main point home or to create suspense for it.

There was a charming and free-spirites woman in Tolkien’s life who supported him in his endeavours? Great. Her role in his essential contributions to the literary world, from what I gathered from the movie, seemed to be minuscule, so why is she given more screen time than those majestically unnerving Uruk-hai scenes?

If anything, the movie should nerd more to satisfy a true Tolkien fan, in my opinion.

The friendships and relationships between Tolkien and his professors are individually warm-hearted and dynamic, their roles in shaping and supporting or in challenging him towards becoming his excellent self are evident. However, the chemistry between Hoult and Collins is close to nonexistent.

I wonder if it is just bad writing or lack of chemistry between the actors, since individually they do a fine job. Hoult carries the movie well and Collins is a lovely, bubbly lady. Nevertheless, any scene pertaining to that part of the Tolkien story is either dragging along, filled with extremely stiff dialogue or just unnecessary altogether. While I did have empathy for her individual struggles and liked the way Tolkien found his way to her as the potential idea of a storyline, it seemes like a waste of time to put those two in a romantic scene, as the communication between the two just had no charisma whatsoever. 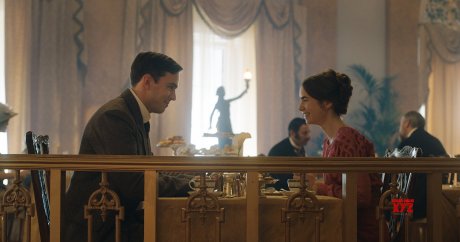 As long as you’re fascinated with Tolkien and his writings, you will find many enjoyable moments in this movie. On a Tuesday night with the right company and/or the right snacks it is the perfect experience. Or let it play as a background entertainment for light reading, as long as you keep looking out for those beautiful visuals.

But for a theatre visit it just doesn’t fall in line with the rest of the excellency I associate with Tolkien’s (and, obviously, Peter Jackson’s) legacy.

So, all in all, without having had great expectations, I was still mildly disappointed.