Welcome back to Quote Digest, where I take apart and reflect on my favourite quotes.

Death in the Andes takes us to the village of Naccos in the mountains of Peru, where two civil guards are investigating the mysterious disappearances of three men, while also reflecting on the women in their lives, and anticipating an immanent guerilla attack.

Llosa won the Nobel Prize in Literature in 2010, „for his cartography of structures of power and his trenchant images of the individual’s resistance, revolt, and defeat.“ (Wiki) While Death in the Andes is one of his lesser known novels, it nicely ties into Llosa’s other works (the protagonist Lituma has also appeared in The Green House – one of Llosas more prominent novels – and in Who Killed Palomino Montero?).

Death in the Andes has a very clear title and message. This novel is a bleak story about the powerlessness of appointed authority, the inevitable rise of political corruption and a corresponding philosophy of violence as an inevitable part of Peruvian history in current times as well as in the old days.

The novel sees many characters being violently killed by the so-called Terrucos (Llosa uses that term as a spanish equivalent to „terrorist“, meaning the guerillas of The Shining Path.) As the fighters denounce human rights, their radical ideology is not open for discussion and exceedingly violent.

Who is not with them is against them:

„We reject and condemn human rights because they are bourgeois, reactionary, counterrevolutionary rights, and are today a weapon of revisionists and imperialists, principally Yankee imperialists.“ (Wiki)

In that capacity, Llosa weaves a few likeable and innocent characters into his novel, who are then quickly tortured and stoned to death by the guerillas. In contrast to this he describes the mythical pishtaco monsters and the pishtaco bandit gangs who, inspired by the namesake creatures, killed people for cannibalistic purposes and smuggled human fat.

The mytholocial and political contexts of the murder mysteries come together in quite an unnerving way in the following quote:

„In the old days people had the courage to face great troubles by making sacrifices. That’s how they maintained the balance. Life and death like a scale with two equal weights, like two rams of equal strength that lock horns and neither one can advance or retreat.“ (237)

As a review for Death calls it a „well-knit social criticism … an ingenious patchwork of the conflicting mythologies that haved shaped the New World psyche“ (TWP), I could not agree more. The aforementioned contexts are relevant to the story and assist in adding more layers to the central murder mystery of the novel, but once stripped of those details, all 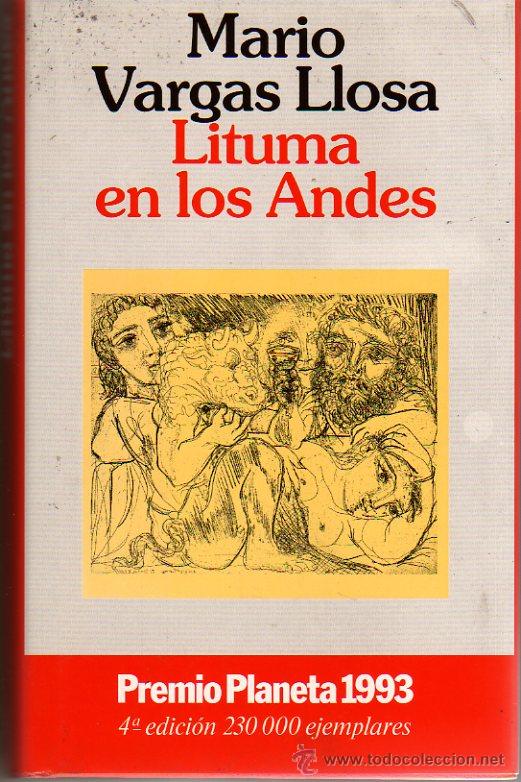 Llosa is telling us is that human suffering is inevitable. Looking back on the emphasized aspects of his Nobel win, these are the exact aspects that were mentioned in the Academy’s description of Llosa’s œuvre.

Death in the Andes shows not necessarily the structures of power themselves, but the oppression and pain they inflict. The main quote I chose talks about sacrifices and the balance gained from those sacrifices. Suffering and death were something one had to take into consideration for just surviving, not even for thriving.

This is somewhat of a general message Llosa conveys, since although in this novel the love story ends positively (partially in a very macabre way), the suffering and violence does not end and is not stopped by that.

The individual’s „resistance, revolt and defeat“ is another topic Llosa approaches from many angles in this novel and in his other works (The Green House, Bad Girl, Aunt Julia and the Scriptwriter etc.). Regardless of whether we are talking about the victims, the guerillas or the police officers, a certain determinism is inevitable, as is usually the case for magical realism.

In comparison to Marquez, whose characters are usually allowed a more positive outcome after their suffering and search for meaning, Llosa’s protagonists – while they usually manage to find an inner strength, reinvent themselves and adapt to their surroundings – are at the mercy of their hopelessness. Their success usually depends solely on their ability to manage their everlasting suffering.

And that is exactly what the chosen quote depicts, managing to fathom Llosa’s essence inside one small paragraph.

I wholeheartedly adore Llosa’s writing and would recommend The Green House and Bad Girl to anyone, while Death in the Andes is a very dark novel and more suited for those who favor authors like Juan Rulfo and Fernando Pessoa. (Hemingway also comes to mind, although he is of English descent and thus does not fit the context as well.)

I wonder if you’ve read anything by Llosa and would like to chime in. Feel free to do so and let’s have a chat in the comment section.

The New York Times: Mountains of the Mind