„Ours is essentially a tragic age, so we refuse to take it tragically.“

English playwrite, novelist, rule-breaker and subject of numerous controversies, D. H. Lawrence died on March 2nd 1930. On the occasion of his recent death day anniversary I would like to take a moment to give praise to this extraordinary writer.

Lady Chatterley’s Lover is a witty criticism of industrialism and cowardice, and a praise to nature. The balance between raw sexuality and pure intellectualism, having been found valuable in Lawrence’s works at later times, has secured him a place amongst the timeless classics.

However, in his own lifetime, his vulgar language and use of profanities were deemed scandalous and resulted in a ban of the book in the United States, Canada, Australia, India, and Japan.

The progressive nature of Lover is not only found in the fleshy side of things. As the main narrative of the novel is a love triangle, another scandalous idea being a possible romance between two individuals from different social classes. Gasp! She is fornicating with the help! Again, albeit Lawrence’s sexual explicitness is not everyone’s cup of tea, his ability to think beyond convention is still commendable.

As such, I would liken him to Günter Grass and Michel Houellebecq, who are notoriously known for their explicit scenes – and it has always been my standpoint that these authors are only using this method to filter their audience and to make the true message of their writings reachable for the open-minded.

(Ironically, the convention-fueled individuals among us would probably not read those authors either, maybe with the exception of Grass – he is a historian of sorts and a recipient of the Nobel Prize for Literature, after all.)

The true story of the novel are for one the devastating conscequences of capable individuals being kept in moral cages, unable to truly pursue their own happiness, and furthermore the moral weight of being dishonest with oneself and one’s family in order to keep up outward appearances. The interesting parts are not the four-letter descriptives for genitals but rather the dynamics between Lady Chatterley and the two men in her life. 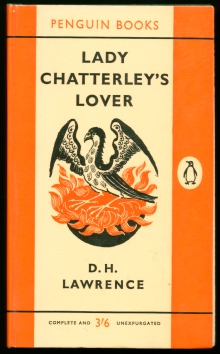 In this sense, I am also reminded of Leila Slimani’s Adele.

The fact that the broader audience is still afraid of a human’s body and its desires, is simply depressing in a general societal sense of existence, but as the main goal at this moment is reminiscing on a great novel, I prefer to focus on the positives in this essay.

„The fairest thing in nature, a flower, still has its roots in earth and manure.“

Another topic is the natural fight between industrialism and nature, a contemporary societal struggle resulting in the fear of machines destroying human individuality. According to Encyclopaedia Britannica, the novel communicates Lawrence’s own belief that „men and women must overcome the deadening restrictions of industrialized society and follow their natural instincts to passionate love“.

Oliver Mellors, the gainkeeper and the lover, clearly symbolizes one side, while the literally paralyzed Lord Chatterley stands for the other. The true core of this novel lies not within the explicit descriptions of body parts, but in the fact that Connie feels lost within her surroundings, and that all so-called civilized and intellectual men around her are void of true passion and authenticity, which leads her to seek emotional satisfaction elsewhere. The fact that her awakening in a more natural setting is accompanied by  regular coitus, seems in this sense almost non-essential.

And while this witty socio-critical commentary is clearly the main topic of Lawrence’s novel, the problem lies within the fact that, as presented in the court case:

„There are thirteen sexual scenes. The curtain is never drawn. […] Sex […] is dragged in at every opportunity.“ (Arte documentary)

… which is countered by a wonderful commentary that if this criticism were true, one could accuse Romeo and Juliet of being solely about climbing balconies. Muhaha.

If roles were reversed, this would not have been a sensation in any manner. But that is painfully obvious even to the simple reader who sneaks Chatterley into their basket for the sex scenes exclusively.

D. H. Lawrence’s oeuvre is largely about breaking sexual taboos: He writes about same sex relationships (The Rainbow), interfamilial love (Sons and Lovers), unconventional affairs and forbidden passions. It is no wonder he had to be disappointed by what is understood as civilized society, who did not allow him to write freely about things that are to be called by their names.

A fearless individual who lived ahead of his time, D. H. Lawrence’s novels are to be remembered as the witty socio-critical thinkpieces they are, and his taboo-breaking realism incourages us to be truly ourselves, to embrace our nature and not be scared to follow our passion.

If you have not yet read anything written by this man, do yourself a favor and go broaden your horizon.