American author Cormac McCarthy has written ten novels, a handful of short stories and a few screenplays. Most, if not all of them include rather graphic and lengthy scenes and plots of violence, morose antagonists and an impending sense of doom.

In addition to those features, McCarthy’s novels are also exceptionally rich in language, precise in nuances when it comes to characters, dialogues or other settings, and highly suspenseful.

No Country for Old Men (2005) is a perfect example of those traits. It is a viciously violent novel that grabs your attention immediately, showing a killer on the hunt. You’d think that the plot is heightened at its initiation point – but it only speeds up when the hunter becomes the hunted himself and doesn’t stop there but goes on to show every character of the novel holding on for their lives, killers at large behind every corner and a gruesome death to be expected sooner rather than later.

A hard novel in its core, the downfall of the protagonist is his humanity. If only Llewelyn Moss, gone out to hunt an antilope, who happens to stumble upon a drug deal gone bad, hadn’t, after stealing two million dollars from the showdown, returned to offer a dying man water.

This humanitarian gesture lets loose the demons. (The Guardian)

Among those demons is contract killer Anton Chigurh, a ruthless and determined taker of lives. His characterization as a dangerous psychopath who takes pleasure in using a captive bolt pistol to kill humans are already enough to send shivers down the reader’s spine. His dialogues are kept short, but hit the spot just as well.

No Country has been praised for its use of language:

The dialogue is perfect. No one has McCarthy’s ear for regional talk, nor eye for details of place. The writing transforms a standard western good-guy-bad-guy plot into serious literature. (The Guardian)

The way things unravel and onlookers‘ (hotel managers, waiters, passers-by, children) reactions to the many and regular killings going on around them only reflect on what is described as „a burning American rage, and how common that rage has become.“ (The Guardian) Of course this is a heightened scenario in a western-type novel, but surely McCarthy’s own views are also reflected in third protagonist sergeant Bell’s inner monologues on the state of society.

This novel reminded me a lot of the movie Nocturnal Creatures, which is meant to be an allegory about a man losing control over his life and causing his wife and daughter the worst imaginable suffering. An intense fear oozing out of the protagonist is contrasted with an extreme lust for brutality to describe the group of men who attacks them on the road. Blood and other bodily fluids are spilled. The tone and continuous emotional intensity and edge of the first part are very similar to McCarthy’s novel.

This intense style has also been critizised:

At times, the whole novel borders on caricature, so unremittingly hard-boiled that it threatens to turn to steam. (NY Times) 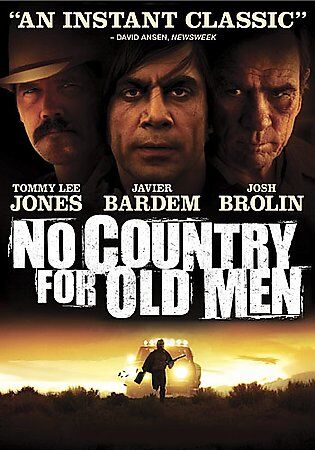 While in comparison to McCarthy’s other, longer novels with more complex plots and less black and white philosophies No Country certainly falls short on layers and character background – however, the purpose of this novel is not to be a psychological analysis or a nuanced political message (rather an obvious one). It is bloody, vicious and unforgiving.

So, no, I do not see the need for there being more psychological nuances or social stances to unpack from this story.

Sergeant Bell’s war-related monologues and guilt trips are even somewhat disturbing the main plot, which does fine on itself, on the count of it being so simple and straight-forward. For me, Moss and Chigurh remained the main players, although one can as well say that the sergeant is the plot-carrying protagonist of this novel. Due to changing perspectives the novel is even more rich in its dynamic.

No Country for Old Men is, for lack of a better expression, short and sweet. The highly suspenseful plot, filled to the brim with murder, raw violence, nihilism and determinism hooks you from page one, and although it only gets more gruesome from there, the suspense is so masterfully kept you can’t help but to experience McCarthy’s masterful writing until the very end.

The Guardian: Gunning for Trouble