‚Little Fires Everyhwere‘: A unique adaptation from book to series

The novel has been adapted into a miniseries recently, and while the gist of the story and the core topics remain the same, Reese Witherspoon has, in my opinion, added very important layers to a story that already goes into the most uncomfortable depths and details of highly interesting subject matter.

Thus, after having read and seen both, book and series, I am able to present to you a rare case of adaptation where source and variation do not lessen but rather complement each other, suggesting a combined consumption as the perfect way to best enjoy the very interesting and layered stories from Shaker Heights.

While this essay does refer to some key plot points of the book and series, it is meant to only give away the gist and reflexion points of the story and characters, but not spoil plot details in regards to either ending. 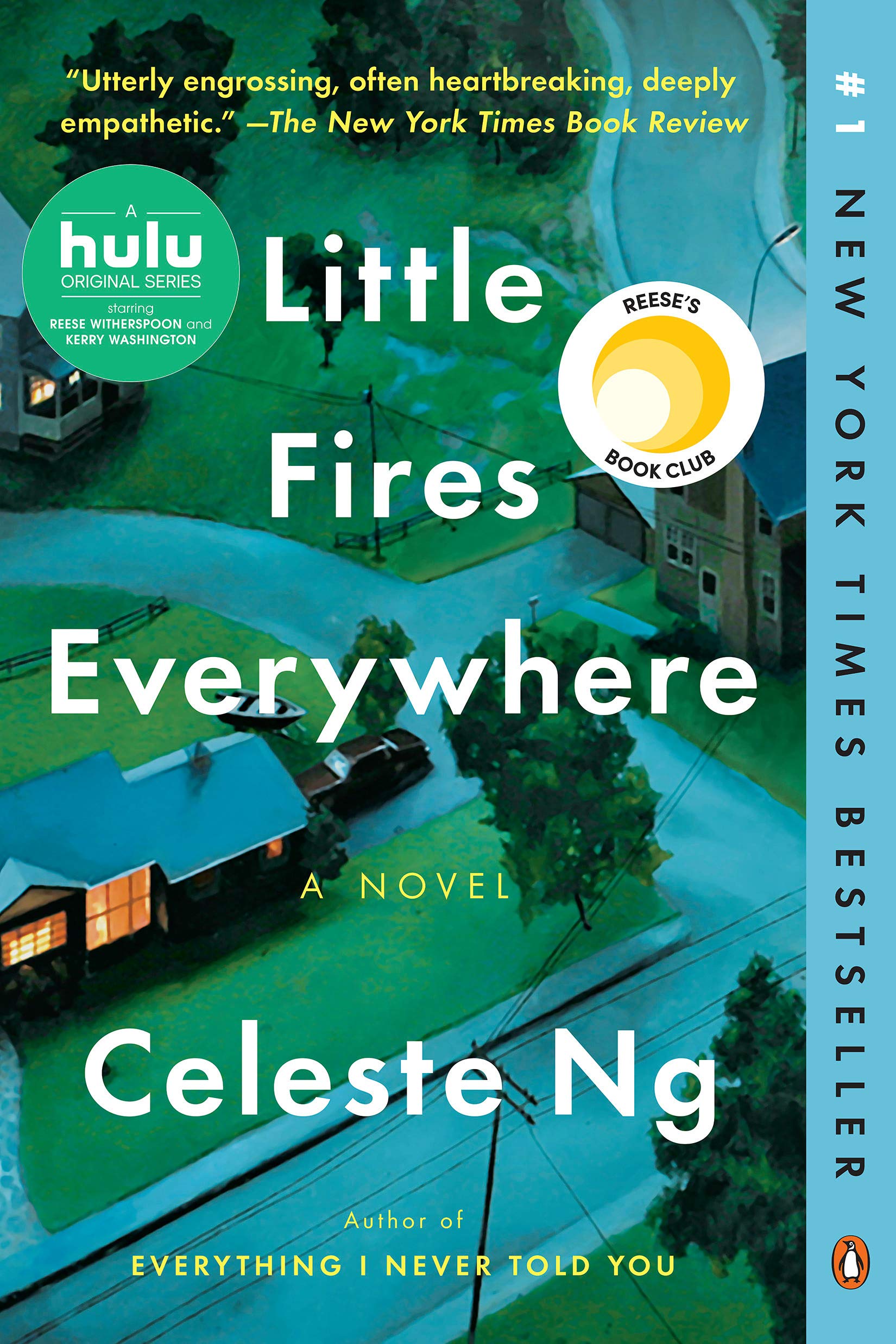 Ng’s depiction of the suburban stepford paradise Shaker Heights is quite detailed in the novel, as is her insight into the protagonist Elena Richardson, who has crafted the perfect life for herself and her family. Her carefully molded children and husband are presented in Elena’s image – presented on their perfect family christmas cards and flawless school transcripts, perfected by their home and lawn, specifically –, the fragility and unsustainability of this delusional reality shines through immediately. Elena, however, is much too preoccupied with keeping up the facade to notice the forming and deepening of cracks… too many cracks.

In comparison, the book goes more into Elena’s thoughts and feelings, while the series better compares and contrasts Elena to the artist and bohemian Mia Warren, newest resident of Shaiker Heights, who rents an apartment from Elena.

Partially because the visual possibilities of the series exceed those of a text and partially because the series‘ focus is slightly different in regards to the whole, the adaptation makes more of a comparison of the two characters. The ways in which Mia and Elena both love their children, how they go about their work life, how they take care of their appearance and how they realize their potential are often juxtapositioned.

When coming from their respective childrens‘ perspectives, however, those comparisons turn into critiques that stay in a rather black-and-white moral and ideological roster, both children critizising their own mother and idealizing the other. However, for the viewer, both characters remain human in the sense that we see them doing some quite despicable things and also making some very ultimate sacrifices – subjectively, all for the sake of their offspring.

The collision of two belief systems – planning and spontaneity, control and the fear of losing control, of restriction and indulgence – is another key topic in both mediums. The novel describes Elena’s idea of a set, planned life and her subsequent altercation with Mia, but the novel shows the growing disquiet and final escalation between the two women from both perspectives and in a highly suspenseful way.

In matters of race and sexuality the series takes leaps ahead of the novel in regards of social criticism. Since I started with the series, I still read Mia and Pearl as black in the novel, and in my view, this choice makes a lot of sense.

Broadening Mia’s sexual orientation is another great addition to the character, and adding a spontaneous trip to visit her emotional and literal past is a clever way to show Elena’s character from another angle, too. (I won’t go into detail about these since it might spoil the series, but I’d love to hear your opinion in the comments below.) So, in many regards, the series gives a reader new interpretations and options to further reflect on the characters they’ve just read about, which in this case works out very well.

The novel and the series choose to focus on different characters, different children and different events, but still embrace the whole plot with all of its sociocritical, emotional and ideological issues – so in this regard, many of the characters like Izzy, Pearl, Trip or even Lexi can be seen not as different but a sum of the sides we are shown of them. In this regard the book and series, again, complement each other wonderfully.

Even the endings, when compared to each other and reflected from the basis of why the characters acted like they did, can serve symbolically – if only – as additional insight into possible outcomes, respectively supporting the other while having a slight difference in execution but not really changing the outcome of the story itself.

In conclusion, I would highly recommend watching and reading both versions of Little Fires Everywhere, and feel like both contribute to the subject matter in a unique and well-excecuted manner.

I am also very excited to hear your thoughts about the choices and changes that were made in the comment section.

(Photos from Amazon and imdb)