American author Annie Proulx is best known for her short story Brokeback Mountain (1997) and novel The Shipping News (1993), both of which have been adapted and received additional acclaim on the silver screen respectively.

Barkskins (2016) is her newest and arguably most ambitious novel, reaching over 700 pages.

Altogether, Barkskins is a story about the relationship between man and nature, showing the continuing destruction of forests around the world and strongly hinting at the impending conscequences of these actions for mankind.

The original protagonists René Sel and Charles Duquet could not be more different: one is a woodcutter with a strong work ethic and a sense of justice, while the other is a thief who stops at nothing to gain financial and social status.

In 1693, both travel to New France, North America together to make their fortunes and live better lives. Although their destinies remain intertwined throughout generations, the becoming of one is shown in parallel to the demise of the other.

One marries a wealthy merchant’s daugher, the other a native american woman. One leaves behind an empire, the other a collection of childhood traumata. Both are in search of a better life for their children, and both are constantly fighting nature’s resistance to their will.

Interestingly enough the fact that moral fibre is no guarantee for success in life is established quite clearly: One’s descendants remain working class, struggling to find their place in life, while the other lays foundation to a timber empire and his heirs accumulate vast riches around the world. 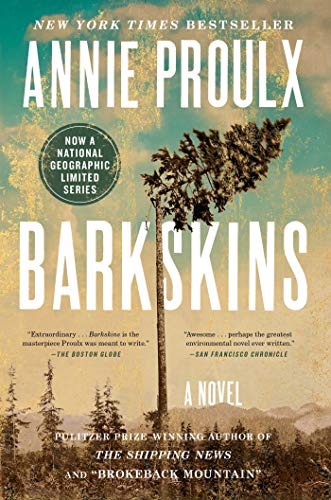 As intricate as that insight might be, that discovery is not even an aspect of the main story of Barkskins – although the dynastic approach as well as the constant struggle for survival and success for sure give the novel a Dickensian feel. (Because a merchant family is at the core of events, it also reminds me of Buddenbrooks.)

When in the last years have you come across a novel with the necessity to add a family tree to facilitate its reader not getting lost amongst all of the characters?

This novel is reminiscent of older French classics, pacing through years of historical developments. Yet, there are no idealisations of man-made architecture or industrial progress – no more than a mention of carriages and, at one point, automobiles, growing cities and changing trade centers, and scientific discoveries; all of those are but footnotes for the real story. Barkskins‘ story is all about shining a light onto the annihiliation of nature and its conscequences.

While there is a vast difference between North American and European perspectives – at one point Dutch merchants are clearly critizising how the Bostonians take down trees without considering conscequences and how reproducing forest is something that must be taken into account – the arrogant belief that those forests are a neverending source of timber carries the settlers‘ endeavors in New France for so long that the damage becomes irreparable.

(There is a character who begins to grow seedlings at one point in the novel, but his position and ambition remain single for a very long time period. Hope is promised, but not yet delivered.)

To add to the white man’s perspective, Barkskins shows a deep interest and appreciation for Native American (and a short introduction into Maori) culture, where individuals with a strong bond to their nature and forests are allowed to state their claim, position and arguments in favor of preserving their homelands as are. Still, the natives are oppressed and forced to either work alongside of the settlers or to leave the land altogether.

While these truths are devastating, appalling and uncomfortable, in the face of climate change this little – or rather large piece of historical fiction is necessary to show us that nature is beautiful and unique in every part of the world and instant gratification from cutting it all down will not bring long-term gratification. That is, neither to the woodcutter looking to feed his children, nor to the timber merchant looking to lay foundation to a dynasty.

However, man prevails over nature and I guess the planet can consider itself lucky that some forests of the world have been now decided to be preserved.

Annie Proulx‘ novel is an ode to forests and trees, and also an interesting collective portrait of different character pieces – although some of them only are allowed a short amount of time and a lot of them die in a most unexpected and brutal way, many of them have very interesting quirks and secrets that also make a reader stop and think on man’s psychological richness for a moment. To be amused and disgusted at the same time is something you can certainly prepare for emotionally. (Homosexuality, cross-dressing and pedophilia were very much a thing in the 17th century and hence forth…)

Nevertheless, this is a book on the history of nature, so for those who love to get lost on long walks, consider Barkskins a stroll alongside the history of humanity, with all its truths and brutality.

In conclusion: this novel is rich and vast both in space and time, but also demands endurance and perseverance. There is a love story, but no happy ending and no hero to root for. Rather, there are very important lessons to be learned.